Finding Faith That Gives Life to the Routine 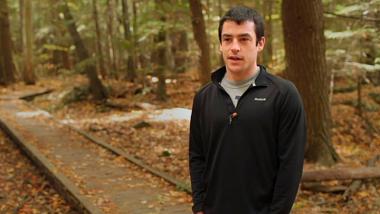 Andrew Dionne graduated from a small high school in Rhode Island and wasn’t recruited for college athletics. He walked onto the cross country and track teams at the University of New Hampshire (UNH) and ran throughout college. Since graduating, Andrew has received small running sponsorships and participated in the 2018 Boston Marathon.

Andrew’s introduction to InterVarsity occurred toward the end of his freshman year. After one of his teammates attended one of InterVarsity’s spring break missions trips, Andrew began to get involved too.

During his junior year, Andrew worked under Maghan Perez, the current director of Athletes InterVarsity (AIV), to help organize the first official AIV chapter on the UNH campus. It was while helping facilitate a larger AIV event toward the end of the year that Andrew realized that he hadn’t actually decided to follow Jesus himself.

He had attended a Presbyterian church growing up. Going to church “was automatic, not a full-blown choice, just something we did,” he said. When he realized that following God had to be his own decision, he decided to follow Christ, and was able to witness his faith grow into something solid and real. That decision proved to be a turning point in his life.

After graduating, Andrew moved back to Rhode Island to pursue his high school teaching career. He served as a volunteer mentor for a new AIV Bible study in the area. He began volunteering as a coach for the running club after school, and when the school offered him an official coaching position, he took it.

For the past five years, Andrew has found enormous satisfaction in that role. “Far and away one of the biggest sources of joy in my life is coaching,” he said. His teams have enjoyed success and are currently nationally ranked, competing at the highest high school level in the country. Andrew greatly enjoys the opportunity to influence young athletes as a coach. “There’s something about not just sharing your sport but sharing it in a mentorship capacity,” he said.

Andrew believes his AIV experience greatly influenced his understanding of what it means to be a Christian. “It made my faith something as real as your everyday best friends. It brought to life a routine I had when I was a kid and showed me the truth behind that routine.”

The changes he experienced during college are happening every day in the lives of other athletes around the country as a result of AIV’s efforts. “The changes that Athletes InterVarsity staff make in people’s lives are … massive and dramatic,” Andrew said. “They’re big, powerful, positive changes.”

For athletes who are unsure about being involved with AIV, Andrew encouraged, “Give it a shot.  It’s worth the risk.” He remembers his experience of testing the waters during his freshman year before diving into the InterVarsity chapter on his campus.

Now, with college behind him, Andrew realizes just how special that opportunity was. “Having that support and structure around you is a very rare thing,” he said. “If you have it available to you, take advantage of it.”