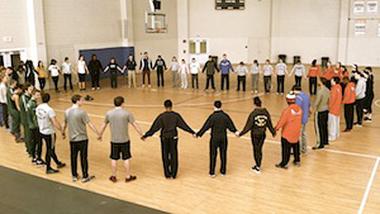 The bus ride from Worcester, MA to the Reggie Lewis Center in Boston took about an hour. During that time I went back and forth between reading my Bible and fighting doubts and fears bouncing around in my head.   Less than a year ago I was a student athlete at Stonehill College.  I now find myself on a bus with our school’s rival, Assumption College, as a sprint coach for the track team.  After I sensed God’s invitation for me to come on staff with InterVarsity in Worcester, He provided an opportunity to coach a sport I love on the campus in which He called me. There I was, sitting on the bus feeling the excitement and fear of what could happen when these two worlds finally collide.

A few weeks ago I was introduced to a track athlete, Brian at Bridgewater State University, wanting to minister to his fellow athletes on campus. When we realized we would be at the same meet in Boston, we felt the Holy Spirit calling us to invite teams to pray before the meet. With multiple colleges and universities competing, and a backdrop of diverse backgrounds at hand, we increasingly became encouraged to step out into this expansive community just as the Apostle Paul did in Corinth.

Waiting for Brian to arrive, the voices of doubt and fear in my mind had plenty to say over the next half hour. “We won’t have time.” “How will this change my relationships with my fellow coaches and athletes?” “Maybe I should wait for the next meet, this doesn’t seem like the right time.” Soon thereafter, Brian arrived with a friend and I thought to myself, “Well, I guess we’re doing this.”

Brian’s eyes told me that he was waiting for me to take the lead, so I started off by making the easy invite to my team.  One down, fourteen to go, “Excuse me…” As I had about 50-70 strangers giving me blank stares awaiting my next word, I nervously told them I was a Christian and would like to invite them to pray together. After a few athletes said thank you, we were on our way to the next team when I thought, “This isn’t so bad.” I invited another, then another, with momentum building I asked Brian to invite the next team. Reluctantly he said yes. With each team we invited, we felt as though we were walking with and being filled by the Holy Spirit.

Initially, five or six athletes came in from Fitchburg State, and then a few more popped in from Emmanuel, then Bridgewater State, then Assumption, and before we knew it, this tiny prayer circle became a window to where God was moving. As we expanded our circle, I asked everyone to look around and notice the different schools, track events, and backgrounds represented, revealing God working in the hearts of athletes all over the country.  A connection not only through sport, but through the perfect blood of Christ.

After reflecting on this entire experience, I want to share three takeaways:

Whether it was being offered the job to coach track in the very beginning, or the Holy Spirit giving us the idea to move in this way at the meet, God was moving before this was even on our radar.

Jesus sent out his disciples two by two, but do we ever stop and think about the immense benefits that come from that? Having a brother or sister by your side will not only encourage you along the way, but it also gives each of you the opportunity to model ministry for one another.

Following the Holy Spirit in ministry is like a child that jumps off the high dive for the first time. We climb the ladder because we want to jump but, looking down, we immediately regret our decision. It isn’t until we throw all rationale out the window that we actually attempt to dive in.  Once we do, we realize that it wasn’t as bad as we thought.  The second time might be a little less scary, and then we get a taste for how thrilling risk taking can be and we hunger for more.

As Brian and I stepped through our fears and took risks for God, we saw both how God was growing our faith, and how doors opened up for more athletes to encounter Him.  That’s contagious.