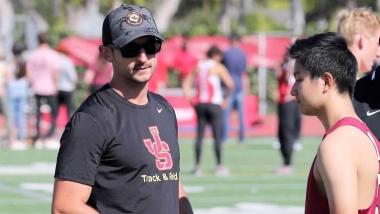 Coach Mickey Miela grew up in southern California. His parents divorced when he was a year old, and his family life didn’t provide a lot of support. “I was on my own—left to figure things out,” he said. In high school, Mickey assumed he was a Christian because he was nice. “[I] thought I was all set,” he said.

Church never played a large role in his upbringing. Instead he found a sense of belonging in sports. “Where I found consistency and the most attention and the most love was in athletics,” Mickey said. “That’s where people paid attention to me, where I felt valued and that I had a sense of purpose.”

During his high school years, as he participated in football and track, Mickey admitted, “I lived for two things: to chase girls around and play sports.” But then a high school breakup caused a rapid shift in his status quo and negatively affected his performance on the football field. “I felt like everything I believed in imploded,” he said.

This sudden change caused Mickey to start questioning what was important. A few friends recommended that he read The Purpose Driven Life by Rick Warren, and after finishing the book, Mickey gave his life to Christ. From that point on, one of his high school track coaches began to mentor him, and Mickey started reading the Bible.

He felt God’s leading in his life for the first time as he chose what college to attend. “[It was the] first big decision I gave to God,” Mickey said. “I felt like he wanted me to play football in college.” So he did just that, playing football and also participating in track for Stonehill College in Massachusetts. His mentor and former high school coach encouraged him to start a Bible study on his college’s track team. In addition to starting that Bible study, Mickey ended up joining an InterVarsity chapter.

During his senior year, Mickey attended InterVarsity’s Urbana Student Missions Conference and felt God calling him to go on staff with InterVarsity. After graduating in 2013, Mickey served as a campus minister at Massachusetts’s Assumption College for four years. After finishing his InterVarsity commitment, he turned his attention to finding a coaching job. “Even in high school, I always felt that coaching was my ultimate calling,” he said. Mickey currently works as the Head Track Coach at JSerra Catholic High School in San Juan Capistrano, California, and is also on the Track and Field coaching staff at Biola University.

Because Mickey has served both as an InterVarsity campus minister and now as an athletic coach, he holds a unique perspective on how choosing to live out his faith affects the way he coaches. Mickey believes that his faith in God provides the motivation for all his endeavors: “[In] everything I do, that’s what drives me.”

As a track coach, he is intentional about making his interactions with his athletes (and all others involved) about more than just the sport. “My desire [as a coach is] to build relationships as a way of displaying Christ’s love,” Mickey said.

He has learned that athletic coaching presents unique challenges to a faith-driven life, even as a coach at a Catholic institution, where faith is built into its culture. Mickey often confronts tough circumstances that require thought, prayer, and intentionality. One situation that can create friction is interacting with parents and students who invoke faith or moral justification for their requests, like providing more playing time. “Tension comes in clarifying what our faith tells us to do,” Mickey said.

Taking his role as both a coach and mentor seriously, he wants to exemplify Christ in the way he not only loves each athlete but in doing what is best for the team. For followers of Christ, coaching often pairs, as Mickey said, “being a strong Christian [with] having to make hard decisions.”

He has discovered a few things that help him stay focused on not only his responsibilities as a coach but his role as a mentor and faith figure in the lives of his athletes. “Stay disciplined in prayer and praying for the team,” Mickey said. He also prays for himself as the coach, asking God for wisdom in leadership. “Even in creating a practice plan, it’s okay to invite God into those things,” he said. Mickey also encourages Christian coaches to remember what is truly important and to incorporate their values and faith into their work as coaches: “[Look] for opportunities where you can break through and share your faith.”