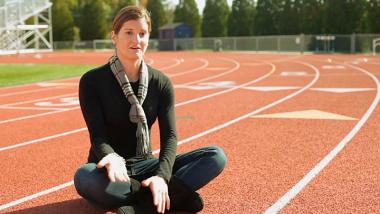 Kaitlyn Dugan came to the University of New Hampshire as a pre-med student with a desire to help others through her career. Ten years later, as she completed her medical residency at a hospital serving vulnerable populations in her hometown of Philadelphia, she realized how pivotal her experiences as an athlete and a member of Athletes InterVarsity (AIV) were to her development.

“It all begins with community,” Kaitlyn said. She found that community through the AIV’s prayer meetings, Bible studies with fellow track and field athletes, and service projects.

Early in her freshman year, Kaitlyn was invited to join a new AIV Bible study. “The focus of AIV at that time was growing in faith together, reaching our teammates, and becoming world changers,” she said. Kaitlyn’s Catholic upbringing had fostered a personal and private faith. Sharing seemed foreign. But as she witnessed God at work in the lives of her fellow student athletes, he began working in her life as well.

“I see my time in AIV as the foundation on which I began to build my faith,” she said. “From freshman to senior year, the change on our team was dramatic. We were no longer defining ourselves by our sport alone.”

In 2008 and then again two years later, Kaitlyn participated in an AIV service trip to New Orleans. The trip first impressed on her what it truly meant to be a world changer. “[The experience] opened my eyes,” she said. “[I realized that faith] is powerful and worth sharing with people.” She also felt called to be intentional about the way she would serve those around her. “I realized that it’s my job and responsibility to care for others.”

During her junior year, Kaitlyn began hosting her own team Bible study. Those leadership experiences laid a foundation for growth that has flourished during her postgraduate medical studies and beyond. God has continued to call her to positions of leadership and influence. “My personality would tend to stay in the background; but God has put me in places where I’ve been challenged to lead and become an influencer,” she said.

She believes perseverance is key for athletes who want to become world changers on their campus, in their athletic circles, and beyond. It’s easy to get discouraged when growth and change take longer than anticipated. “Remember that God will lead the way,” she said.

Coaching is critical in athletics: finding people who can stand by you, invest in you, and help you grow is critical. AIV brought coaching to spiritual growth, her campus ministers equipped her and her fellow student athletes with the resources they needed to be able to lead Bible studies and have conversations with her teammates to share her faith.

“Changing the world starts with changing those around you,” Kaitlyn  said.